For Bioshock Infinite DLC, prepare to be enraptured 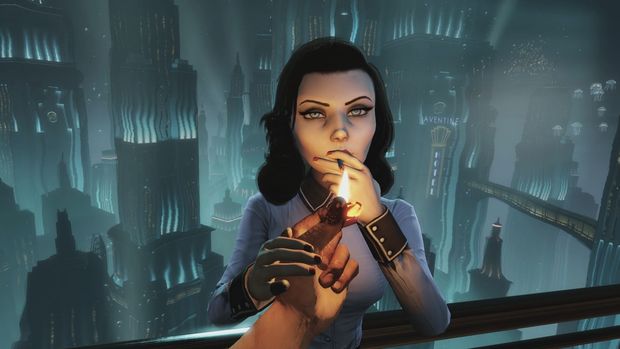 At long last, Irrational Games has broken the silence on what to expect for Bioshock Infinite‘s DLC.  Those hungry for the opportunity to take the raw action that the first-person shooter offered in its original outing as far as it can go will be happy to
Clash in the Clouds against waves of every enemy in the game in four new arenas.

Those hungry for the real meat and potatoes of the Bioshock experience, meanwhile, will have their fill with the two-part special Burial at Sea.  Players will take the plunge once again into the underwater city of Rapture where the events of the original Bioshock took place, but instead of playing as Jack, this time we get to step once more into the shoes of Infinite protagonist Booker deWitt, set at some indefinite period of time before Andrew Ryan’s underwater utopia went haywire.

Set against a decidedly film noir backdrop and tone, Elizabeth has sought out deWitt to take on some sort of mysterious mission — a case to solve, perhaps. Judging from the trailer below for episode 1, deWitt seems all too happy to accept, and through his eyes we will be treated to visions of Rapture just prior to its vicious descent into madness and ruin.

Anyone disappointed by this news of returning to Rapture rather than exploring a new world will be delighted to hear that Irrational has no intention of cutting and pasting the original Bioshock experience.  Instead, creative director Ken Levine has announced that the Rapture players will experience here has been built entirely new from the ground up, and while some old characters might make an appearance, players can look forward to a whole host of new characters and challenges that merge favorites from both games, including tears, sky-lines, and Big Daddies.

In episode 2, players will take on the role of Elizabeth for the first time in the series.  Details teased so far suggest that her installment will feature stealth mechanics, as that game will play more like a survival horror game.

Clash in the Clouds is available later today on Steam and on PSN/Xbox Live by the end of the week.  No release date for Burial at Sea has been announced yet, but judging from the polish of the trailer below, it would not be a surprise if it hit the airwaves by this winter.

I personally am really looking forward to this as I love anything and everything film noir, though I doubt Burial at Sea will allow players to play detective and hunt for clues in the way that LA Noire or the upcoming new IP Murdered: Soul Suspect is geared toward.

What do you think? Are you excited for the opportunity to play hardboiled detective in the midst of Rapture, or do you wish you could take your Shock Jockey elsewhere?
Sound off in the comments below!