Disgusted with social indifference toward crime in Seattle, Washington, MMA fighter Phoenix Jones (born Benjamin John Francis Fodor) formed the Rain City Superhero Movement in 2011 to document and — if necessary — intervene in violent crimes.  The whole idea might sound crazy, but Jones has had no grand delusions of becoming a full-time vigilante capable of cleaning up an entire city by taking the law into his own hands.

Instead, he has galvanized a team of fellow MMA figheters, police officers, medical professionals, active and ex-military officers, and professional cameramen to join him in patrolling the streets on a proactive neighborhood watch, and that means calling 911 right away when catching someone up to no good and jumping in to curb the perps only when its clear that things are about to get ugly.  On the whole, their intent is to motivate the average person to shake off the bystander effect and take swift and immediate action against acts of injustice.

With the release of Kick-Ass predating the formation of the Rain City Superhero Movement by just a few months and with the sequel hitting theaters everywhere later this week, anyone who learns of Jones now will probably think Millar’s comic inspired his cause, but such is not the case.  Before I heard of Jones, I had thought that the idea of someone taking matters into their own hands to take a bite out of crime while teaming up with others that have also grown sick of waiting for the cops to take care of business was going to be the whole premise of the original Kick-Ass, but ironically that’s precisely what Kick-Ass 2 delivered.

At first, Dave Lizewski (Aaron Taylor-Johnson) hangs up his mask thinking that enough is enough with his experiment in playing the hero and that now’s the time to move on with finding a normal life, but it doesn’t take long at all for him to realize what we all know about the so-called “real world” — it’s boring as hell.  Rather than succumbing to senioritis and going through whatever motions lie after that, Lizewski begs Mindy Macready (Chloë Grace Moretz) to toughen him up so that this time around, he could actually last more than five seconds in a fight as Kick-Ass and maybe even be able to walk away once in a while.  Macready doesn’t take much convincing to take him up on the offer, but when she gets caught by her father’s old detective friend (played by Morris Chestnut) that now keeps a roof over her head, she is forced to call training off due to the promise she made to her late father that she would quit playing superhero and start getting back to building exactly the kind of normal life that has been making Lizewski gag on a spoon.

Thus the stage is set for both leads to chase after that age-old question that dogs us all: what do you want to be when you grow up?  Of course, with a title like Kick-Ass, you can bet that no one’s going to be sitting around on the couch all day stressing over that big question and keeping their feelings bottled up inside them.  As Macready hangs up her mask to try her best to follow through on the promise she made, Kizewski takes to the streets and stumbles upon Justice Forever — and that’s where the real fun begins. 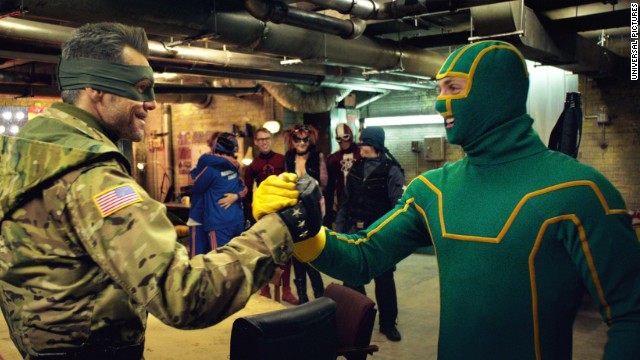 Jim Carrey’s Colonel Stars and Stripes is the bold and brazen father that doesn’t wait for a written invitation to do anything that Kizewski wishes he had, and it’s a welcome turn for Carrey, particularly since it’s rare for him to play the anchor that other characters need to ground themselves with a sense of purpose and direction.  Come to think of it, it’s brilliant casting considering Carrey has been down the road of a character grappling with identity and the masks we wear before.  Donald Faison’s Dr. Gravity, meanwhile, is inevitably the Turk to Kizewski’s J.D., and watching him team up with Kick-Ass makes you wonder why Scrubs never had a superhero-themed episode.  Alongside Lindy Booth’s Night Bitch (think the kinky lovechild of Harley Quinn and Catwoman), it’s a marvel how these silver screen veterans never steal the show from the relative newcomers in the marquee.

If there is anyone that does steal the show in every scene they’re in, it’s Moretz.  Whether she’s schooling Kick-Ass in kicking ass or doing her best to fit in with the in-crowd in her freshman year in high school, she storms in with the kind of gale force that would make Thor blush and never lets up. On rare occasion her fire-bred intensity works against her when we are to supposed to empathize with her struggles to overcome blows not dealt by fisticuffs because we know all too well that she isn’t some helpless little girl who’s going to cry and go fetal for anything.  Even still, Moretz can make you forget Hit Girl for just long enough to feel like maybe — just maybe — you’ve been in Macready’s shoes at one point in your life.  Sure most of us haven’t taken up jiu-jitsu and haven’t studied weaponry to the exhaustive point of being able to rattle off exactly how fast a handgun bullet travels, but most of us have dealt with trying to figure out which part of ourselves is genuine — when we’re wearing a mask, and when we’re not.

All in all, as long as you plan to suspend your disbelief for the action scenes at the door, profanity spewing from the mouths of people clad as superheroes — and supervillians — in Hollywood’s best version of the so-called “real world” doesn’t bother you, and you’ve got the stomach for fatalities near worthy of Mortal Kombat, this is a sequel that delivers.  Be sure to stay tuned after the credits for what might be the most ridiculous scene in the entire movie.