While you are all getting psyched up for the most infamous nerd prom in all the land coming later this week, I had the fantastic opportunity while on a visit home to my native east coast to fulfill my comic convention quota for the month at Connecticon.  While proudly hailing itself as “a celebration of pop culture – everything from anime, to science fiction, comic books and card games,” this weekend-long festival of cool might as well have billed itself as a voice actor’s paradise this year, as most of the honored guest list would have felt right at home on Rob Paulsen’s Talkin’ Toons podcast. 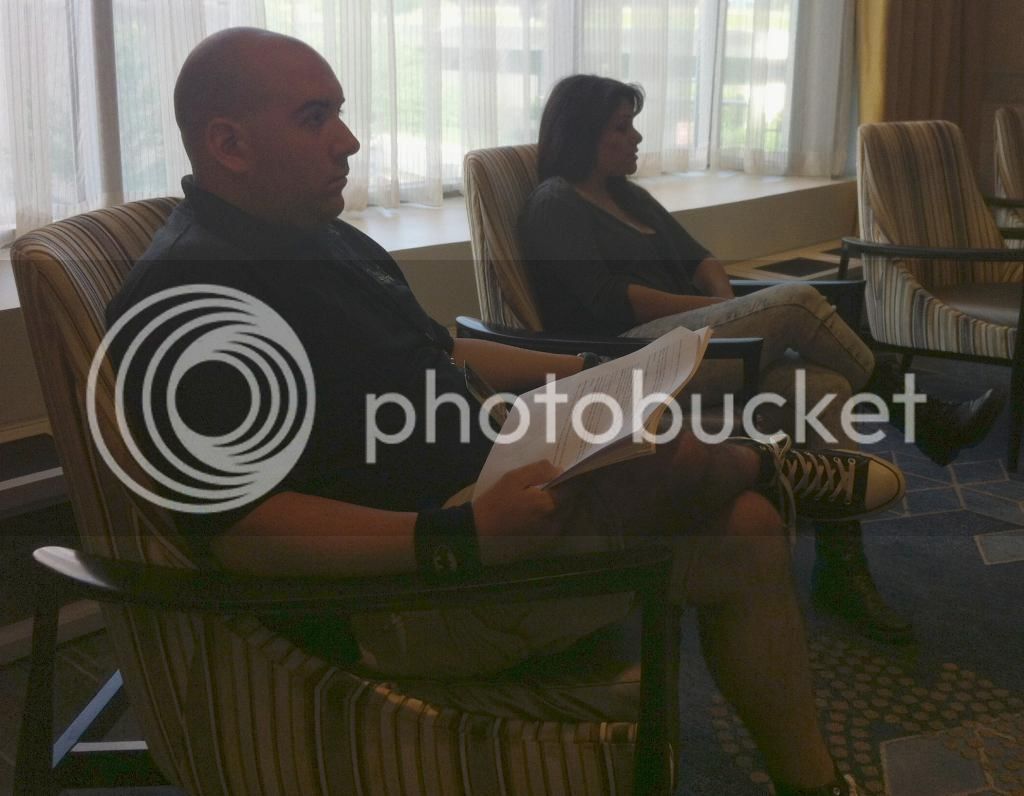 Our day began with a front row seat on native Angeleno Lauren Landa’s Q&A session, whom animé aficionados will recognize as the voice Annie Leonhardt in Attack on Titan and will get Landa’s joke: “Here’s the thing about Annie…she starts off as a side character, but she gets bigger.”

Landa revealed she did not know anything about the Titan series whatsoever until she auditioned for the role, but after she was given the beginning of the series to take home and watch, she got just as hooked as any fan would and has yet to go past episode 13.  Someday Landa hopes to visit Gotham City and lend her pipes to the likes of Poison Ivy, Catwoman, or Harley Quinn, but in the meantime, she teased the crowd with the announcement that she will be playing Ain in the English-dubbed version of One Piece: Film Z, which will be hitting North America on September 30, 2014.

Although the promise of sweet, moist, and delicious cake to be served to the press next proved to be a lie, meeting the voice of GLaDOs from the Portal series and her husband the Sniper from Team Fortress 2 was a true pleasure.  Remarkably, Ellen McClain noted that when she auditioned for the role of everyone’s favorite homicidal AI, she didn’t know that Valve would later be putting her voice through autotune and other audio filter wizardry — she simply did the best she could to sound like the computer-generated voice she was presented with and instructed to imitate to the best of her ability.

“The thing that surprised me most is that they let me sing,” McClain chuckled.

Despite her stunning opera and theatre repertoire, the first time anyone at Valve had her her sing was when she came in to record Jonathan Coulton’s notorious closer “Still Alive.”  It didn’t take nearly that long for her loving husband, John Patrick Lowrie, to appreciate the fullest extent of her talents, however.  When the couple moved to Seattle in 1989, Lowrie was the one who gave McClain the gentle nudge to give voice acting for video games a try — and Lowrie was keen to remind us to keep in mind this was at a time when video game companies naïvely thought they had no need for women in the business.  Soon enough, Sierra Online and Humungous Games gave both Lowrie and McClain a shot, and the rest, as they say, is history.

Before leaving to host another Q&A for the public focused on writing later that day, I could not help but ask if the couple had been contacted by Valve to start working on any games that count up to 3 any time soon.  Lowrie and McClain smiled humbly and offered only that they are the last on the food chain to be contacted about such things, but they would certainly be more than happy to come back to Valve for more when they are ready for them.  Let us all hope that phone call comes sooner than later.

Next up on our tour of ConnectiCon’s voice acting paradise was the dynamic duo of Richard Horvitz and Rikki Simons, best known for working together on the sinisterly silly animated series Invader Zim.  To anyone who doubts the continued popularity of the series, Rikki seemed relieved not to be reliving his craziest con experience so far, as he shared the story of how one time in Florida a fan jumped right up to him and bit him in the arm “and then hung on [while] I continued to sign autographs because I thought she’d fall off sooner than later.”

As my introduction to Horwitz came not with Zim but with the critically acclaimed, yet often criminally overlooked game Psychonauts, I asked Horwitz if there was any possibility Double Fine might have him back soon to reprise his role as the protagonist Raz.

“I really hope so,” Horvitz beamed, “but it depends if interest is there [for a sequel] and if Tim Schafer and Double Fine can raise the money to produce it.”  He went on to recount the now-famous news story of how beloved Minecraft co-creator Markus “Notch” Persson reached out to Schafer via Twitter to offer to help fund Psychonauts 2, but after learning that the sequel was estimated to cost a cool $18 million to produce, Notch regrettably had to decline as he is still neck-deep in other exciting independent gaming projects at the moment and therefore would not be able to give the sequel the dedication it deserves.  Horvitz was sure to point out that he has continued to work with Schafer on other Double Fine projects, however, most recently as The Space Weaver in the point-and-click adventure Broken Age.

For the coup de grâce, Pinky & The Brain took the junket by storm and later performed the entirety of Dr. Seuss’ classic Green Eggs and Ham as our two favorite lab mice bent on world domination.  When local radio personality and aspiring voice actor Rob Roman opened up the panel by asking the two legends for advice on how to embark on a career in voice acting, LaMarche and Paulsen strongly encouraged him and everyone else anxious to break into the business to take regular acting classes and/or pursue whatever other sort of acting experience that one can, for being on the mic for a cartoon or a video game is not just about making funny voices — it’s about embodying a unique character, first and foremost.  LaMarche, also a veteran of the stand-up circuit, admitted that the audition process for voice acting has changed a great deal since he and his fellow lab mouse got their start, and that you can never know what to expect from casting producers.

“When I went in to audition for The Real Ghostbusters,” LaMarche recounted, “they told me: ‘don’t impersonate anyone from the movie.'” He then stood there baffled, not knowing what else he could possibly do but sound like the actors in the feature film, thinking: “I don’t have anything except Harold Ramis!”  He went in, did his best Egon, and as we all know today got the part anyway, proving that sometimes, people just do not know what they really want until they see or hear it for themselves.  Later into the cartoon’s run, LaMarche recalled how he felt guilty when Bill Murray called into the studio to ask the production team why they were able to find someone to pull off Ramis’ part, but “how come my guy sounds like Garfield the cat?”  When that happened, Lorenzo Music was traded in for Full House‘s Dave Coulier, and ironically after Music passed away and a Garfield movie was made in 2004, Murray stepped in to take over Music’s lead as the voice of the lasagna-loving feline Music brought to us for years on Saturday mornings.  LaMarche went on to recount that — to add another scrumptious layer to the irony of it all — Ernie Hudson had come in to audition for Winston, but the producers opted to go with Arsenio Hall instead.  Go figure!

When asked if it was his choice to join the cast of the new Teenage Mutant Ninja Turtles cartoon, Paulsen mused with heartfelt gratitude that “it’s flattering that people in the viewing public think we have the power to pick our parts.”  When Nickelodeon gave Paulsen the green light to be a ninja turtle once again, Paulsen laughed at how he “was a victim of my own ageism,” thinking there is no way in Dimension X they would truly want him to do this since he is “a few years away from the ‘Teenage’ part” (to which LaMarche added: “but not the ‘Mutant’ part.”)

Paulsen and LaMarche concluded their panel by teasing how they would soon be working together again on a new adaptation loosely based on Snow White and the Seven Dwarves called The 7D alongside Billy West and Kevin Michael Richardson and that Animaniacs showrunner Tom Ruegger will be at the helm, so we can all look forward to the same sort of zany adult humor snuck in between the lines of this new kid-friendly program that we all came to expect with the Warner Brothers (and the Warner Sister).

As phenomenal as this all was, this barely scratches the surface of what ConnectiCon had to offer this year, and next year promises to be even bigger and better than ever before.  If you happen to be traveling to the east coast next mid-July, be sure to look it up! A Female 13th Doctor: Why This May Have Been Inevitable