I. Marlene King and the cast of Pretty Little Liars announced Monday that season seven would be the final season of the show. 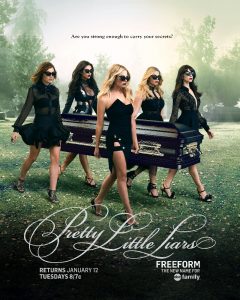 This shouldn’t come as too much of a surprise to fans. King alluded to this being the final season at New York Comic Con last year. Recently, she backtracked saying that it was the end of PLL as we know it after fans freaked out.

The summer finale will air Tuesday, with the last half of the season premiering April 2017. The series finale will be a special two-hour episode.

Fans will finally get all of their questions answered in the final episodes, which Hale says are crazy, “we’re going out with a bang.”

“It’s been an honor to work with such a talented cast and crew over the last seven years. We are a family, and it will be hard to say goodbye to a show that has made such an impact on young audiences and been a mouthpiece for cultural change. I’m excited for fans to finally have all of their questions answered, and I believe they will be satisfied with the wild ride that is our last ten episodes,” Marlene said.

According to Variety, Freeform would have liked to continue with the show if Marlene and the cast signed on for more seasons. The cast contracts are up at the end of the season, and according to insiders, “the story had run its course.”

PLL isn’t over yet. We still have the summer finale Tuesday and a lot of questions to be answered before we say goodbye to the Liars.