Whoever this new A is, they like making their game as elaborate as possible. Every detail has been thought of and there’s no turning back once you roll the dice. 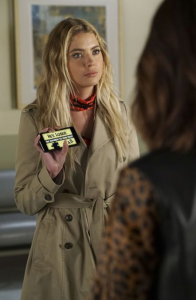 We were told that someone wouldn’t make it through the episode. We had a scare with Caleb (Tyler Blackburn) in the promo, but would the writers really kill one-half of Haleb this early in the last ten episodes? I didn’t think so. My other guess was Yvonne (Kara Royster) and I was right there again. The writers did choose to kill her off. While I’m happy for what that could mean for the fate of Spoby, I’m disappointed that there was no shock factor. We’re in the home run now, there should be nothing but shocks.

There really hasn’t been a lot of shocks coming out of these last ten episodes. The elaborate game is sure making things interesting, though. A.D. sent Hanna (Ashley Benson) an almost life-like doll, with blood and all. She had to cut it open to find the next clue. Unfortunately, Hanna wasn’t able to finish her part because she had to rush to the hospital to see Caleb. What would have been her reward if she finished?

It’s like old times having Hanna tell Caleb what’s going on and him jumping in to be the hero. How long could Hanna really go without telling him about the game?

Leave it to A.D. to put fail safes in the board game to make sure no one went poking around. What kind of toxin was that? Luckily, Spener (Troian Bellisario) got Caleb to the hospital quick enough. What else does A.D. have hidden in the game?

One surprise of the night was Nicole (Rebecca Breeds) being in Ezra’s (Ian Harding) apartment. Nicole looked just as shocked to see Aria (Lucy Hale) as Aria was to see her. Ezra’s a nice guy and I get why he’s being there for Nicole, but I feel so uncertain about the future of Ezria. What does this mean? And where is Ezra?

I hate watching Aria go through all of this, but that doesn’t change how mighty she is. When she and Emily (Shay Mitchell) were investigating Sydney (Chloe Bridges), she was just as tough as ever. She really is small but mighty.

As sweet as Marco (Nicholas Gonzalez) is, he’s not Toby, but it was nice seeing Spencer relax a little. We did get a great Spoby moment at the end, even though it was heartbreaking watching Toby. He got married and lost his wife in the same day. He didn’t deserve that.

Between the life-like doll, Caleb being poisoned and now a finger of an unknown person, this game is really getting scary. What’s next?