This episode was definitely all about Simon and the aftermath of the Clace kiss. Nothing can protect you from a broken heart, not being undead, not even being a daywalker.

Alberto Rosende did such an amazing job in this episode. It’s probably why I was constantly tweeting about him. Simon was just like anyone with a broken heart, just instead of alcohol, he was getting drunk on blood.

He was told to be careful. The other vampires are jealous that he’s a daywalker and they aren’t. As soon as I heard that girl he was feeding on was dead, I knew he was set up. There wasn’t a second that I believed he could do that. He’s just too good a person. It doesn’t matter if he is a vampire now, that’s just not him.

I’m heartbroken that Climon is broken up. I know I was always a Clace fan but seeing Simon and Clary together there was just something so beautiful about them. I’m just happy that their wonderful friendship isn’t ruined forever. That’s why I love them so much. They have such a strong friendship. That is the dream, to fall in love with your best friend.

Luke (Isaiah Mustafa) and Simon scenes are always great, but seeing Luke tell Simon that he’s the closest thing he has to a son, was something special. I hated that Luke thought Simon could have killed someone, but loved that he was still trying to protect Simon. I’m glad that even if he needs to take a break from Clary (Katherine McNamara), he still has Luke in his corner.

Were we aware that these vampires could compel humans just like the vampires in The Vampire Diaries? I don’t recall, but I love that Luke had Raphael (David Castro) compel the cop to forget Simon. I know it wasn’t just about Simon, it was about the downworlders and her. It was still cool to see. Raphael may have stopped short of helping Simon earlier in the episode, but he came through then, even if it was for more than just Simon. 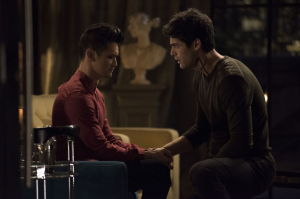 This was definitely an emotional episode. From the beginning, Magnus (Harry Shum Jr.) was having flashbacks to when he was a boy and his mother died. We had to wait the entire episode to know why he was remembering these horrible memories and what happened. His mother just committed suicide and his magic overcame him. Between that and his stepfather calling him a monster, he set his stepfather on fire. I don’t believe he was in control of his magic. Just think about Luke. He went away after Jocelyn died because he couldn’t control himself and he’s a grown man. Magnus can’t let that weigh on him. He has to forgive himself. It did make for a beautiful scene between Alec (Matthew Daddario) and Magnus, though. They’re closer because of it. It may take Magnus time to get through that pain, but at least he has Alec to lean on.

From the moment we met Sebastian (Will Tudor), I didn’t trust him. Apparently, he was never actually Sebastian, he was Valentine’s son. I didn’t see that coming, but as they were transferring Valentine, I knew something bad was about to happen. That is always the risk you take when transferring a prisoner.

Shadowhunters was so emotional this week and Izzy (Emeraude Toubia) was there along the way giving great advice.