This week the black hood seriously tested relationships. Jughead is also being tested. How can he be one of the Serpents to survive and stay true to his friends? 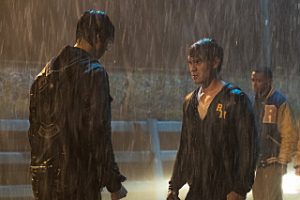 Last week Archie (K.J. Apa) created the red circle and made a video threatening the black hood. If that wasn’t bad enough, he’s going down an even darker path. Veronica (Camila Mendes) may have stopped him from going too far down that path. He bought the gun and he wanted to use it but Ronnie kept the gun from him. She went all out on supporting her man with designing t-shirts to support his cause.

I was not pleased with Hermione (Marisol Nichols) when she was talking about blind loyalty. She certainly has blind loyalty for her husband. It’s made me sick watching her loyalty for Hiram (Mark Consuelos) after she did whatever she had to for Veronica when they first got to Riverdale. Ronnie isn’t like that at all. She’s loyal to her man but she asks questions and keeps him in check. I’m not sure where this strength and wisdom comes from but it certainly wasn’t from her mother. Archie and Veronica are being tested through these hard times and it seems to be bringing them closer together. And on top of that, she’s even getting Archie to talk about what happened. She’s a better girlfriend than she ever realized. 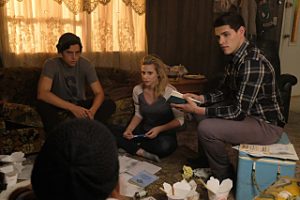 Jughead (Cole Sprouse) and Betty (Lili Reinhart) on the other hand, are a little rocky. They don’t seem to trust each other anymore. And Jughead being able to go an entire day without talking to Betty is a bad sign. I think Toni (Vanessa Morgan) is probably pretty sweet and a nice girl but she’s coming between Bughead, so it’s hard to like her. Toni and Jughead seem to have a lot in common and, at the moment, they are on the same side of the tracks. I’m more worried about Jughead than Archie at the moment. Veronica can reign Archie in, but Jughead is trying too hard to fit in with the Serpents. The Serpents are going after his best friend and he didn’t try hard enough to protect him. I get it, but this could really come between all of them. If it wasn’t for Ronnie, the Serpents against the football players could have gotten a lot worse. How long can Jughead hide who he is to the Serpents and hide what he’s doing to his friends? At some point, the worlds will collide and he’ll have to choose. I don’t believe that his only choice is to just choose sides. I think he can also just be honest to both sides.

We’ve been having some major Zodiac vibes with the letters and the cipher. Now the black hood is calling Betty and I’m getting major Scream vibes. I’m enjoying the murder mystery but I’m not sure the series knows what type of serial killer it wants. It is a little nerve wracking that the killer is saying he got inspiration from Betty’s speech. Lili did say her speech had an impact at San Diego Comic-Con. I just didn’t think she meant in a negative way.