Is there going to be anyone left unscathed after the Black Hood is done with them? This week there were no deaths but this mystery killer still did a lot of damage.

I didn’t really feel bad for Alice (Mädchen Amick). If anything she had it coming. She preaches so much so it’s no surprise that she wasn’t perfect growing up. Dredging up Mrs. Cooper’s past was the easy task Betty (Lili Reinhart) was asked to do by the Black Hood. Everything else was not easy at all. Veronica (Camila Mendes) and Jughead (Cole Sprouse) did create easy openings, though.

I don’t for one second believe that Veronica is a bad person but she did get wrapped up in pleasing Nick for her parents. Her crowd is not the do drugs kind of crowd, so she shouldn’t have pressured everyone to do it. It gave Betty the opening she needed to do what she needed to do to save her life. Betty is one good actor. I didn’t see that coming. I think apologizing to Veronica will be a lot easier than apologizing to Jughead. Veronica knows she was not right. She came to her senses when Nick tried to have sex with her despite her saying no more than once. The Veronica we know is still in there, she just got a little lost for a moment. 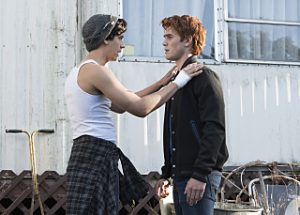 Jughead gave Archie (K.J. Apa) a very easy reason to say why Betty didn’t want to see him anymore. I still can’t believe Jughead has joined the Serpents. He needs his friends more than ever right now and Archie just pushed him away. I’m not sure keeping Jughead safe from the Black Hood is going to make much of a difference now that he’s joined a gang. It didn’t take long for Jughead to move on. That’s why this is going to be hard to walk back. I knew that’s exactly what breaking up with him would do. I don’t see how Jughead can come back from this.

Betty is going down a very dark path. She had to save her sister so she had to give the Black Hood a name, Nick. Not that he didn’t deserve it but he got his punishment when the Pussycats beat him up. Now Betty is an accessory to murder. This will come back to haunt her.

Whoever the Black Hood is, it seems to be like it could be her mom. Mrs. Cooper would love Betty to cut off all of her friends.